I of Owerri, Year of Divine Expansion. 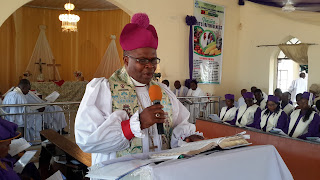 The Anglican Bishop of Owerri, the Rt. Revd. Chukwuma Chinekezi Oparah Ph. D, JP, has declared 2019 as a Year of Divine Expansion.


Bishop Oparah gave this prophetic declaration in his message at the Cross-Over Night Special Service, held at Christ's Anglican Church Owerri on the night of Monday, 31st December, 2018, to usher in the New Year, 2019.

He declared that Nigeria, in no distant time from now, would be a celebrated nation.

The Prelate, who noted that there is nothing too hard for God to do, gave the assurance that God would raise all who believe and worship Him from the position of servitude to freedom and expansion, drawing his text from Exodus 14:5-19. He added that when the grace of God locates you, He would make the power of the enemy powerless.

Fear not, he said, the Lord would in this new year see all of us through, despite all odds.

The service which was conducted by the Archdeacon in-charge, Christ's Church Archdeaconry, Owerri Ven. Zion Ngoka featured wonderful testimonies and melodious renditions, as the two lessons of the special service, drawn from Isaiah 65:15b-25 and Revelation 21:1-6, were taken by Mrs. Chizor Ngoka, wife of the Archdeacon, and Barrister Ken Opara respectively.
Posted by ANGLICAN DIOCESE OF OWERRI at 5:45 AM