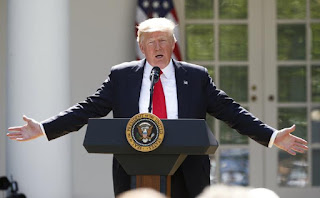 Donald Trump has broken a near 20-year tradition by refusing to host a White House iftar dinner marking the end of Ramadan.


Despite previous administrations holding a dinner reception to celebrate the festival, this year Trump simply published a statement late on Saturday afternoon to coincide with the end of the holy month.

The tradition – believed to originate in 1805 when Thomas Jefferson hosting a Tunisian ambassador during Ramadan – was resurrected when Hillary Clinton was secretary of state in 1996.

The sunset meal attended by politicians, diplomats and Muslim faith leaders became an annual event from 1999 continuing through George Bush's rule, including shortly after the 9/11 attacks.

Barack Obama hosted his first Ramadan reception in 2009 and continued through each year of his presidency.

But Trump's choice not to host an event comes after his secretary of state, Rex Tillerson, refused a recommendation by the state department's office of religion and global affairs – which initiates such occasions – to host an Eid al-Fitr reception, according to Reuters.

Instead a statement signed by the President and First Lady read: 'Muslims in the United States joined those around the world during the holy month of Ramadan to focus on acts of faith and charity.

'Now, as they commemorate Eid with family and friends, they carry on the tradition of helping neighbours and breaking bread with people from all walks of life. During this holiday, we are reminded of the importance of mercy, compassion, and goodwill. With Muslims around the world, the United States renews our commitment to honour these values. Eid Mubarak.'

(c) Christian today
Posted by ANGLICAN DIOCESE OF OWERRI at 10:40 AM