WHEN YOU ARE IN CHURCH TO COLLECT CURSES - Primate 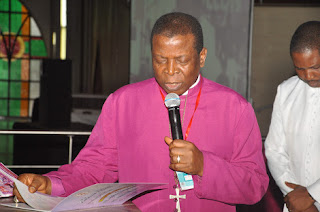 Primate of All Nigeria, the Most Rev. Nicholas D. Okoh, has warned that Christians who try to double cross God by stealing church money, telling lies and doing things with church projects, believing they have arrived, are in for trouble.

Such Christians, he said, are only coming to church to collect curses, because, according to him, after stealing church money God comes down and visits them severely.

The Primate described the church as a rescue mission, adding that Christians should rescue each other.

According to the head of the Anglican Church in Nigeria, for God to inflate anybody you must deflate yourself for God.

He said that the humility of the incarnation of God should be the vision and mission of the church.

The Primate stated all these at the 2017 singspiration Christmas Concert, a yearly Christmas Cantata held at the Basilica of Grace Apo Abuja.

On the rejection of posting to rural areas by priests the Most Rev. Nicholas Okoh, expressed disgust at hearing that some missionaries reject their postings to rural areas.

Archbishop Okoh stated that 100 years after the missionaries have given their lives and died for the gospel, there is no village in Nigeria today that is bad and inaccessible

According to him, if people cannot marry what they claim to be “born again believers in Christ, to the urgent assignment of spreading and preaching the gospel, then, they are fake Christians and pretenders.

He observed that early missionaries left the glory of their places in Europe and America to travel to Africa for the gospel, many dying in the process.

He said, the Church must not be static, it should be a moving stream; hence every man, every woman must move, go forward, not being stagnant. He added that the ministry of preaching the gospel is a risky business, a ministry of service, but people have deemphasized service because of so many attachments and have become vain in many ways.

He said despite the heavy dancing and music enjoyment and celebration in the Church, evil is still growing, because the mind of the people has not been captured.

He said it is not surprising, therefore, that when people leave the church, they commit atrocities with impunity, adding that the dancing has taken away the reality of the faith.

(c) Christian voice newspaper
Posted by ANGLICAN DIOCESE OF OWERRI at 8:39 AM