Am religious, a Christian: Victor Moses 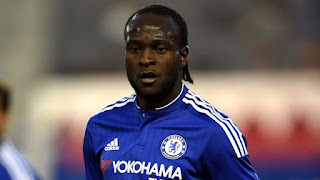 Nigerian international, Victor Moses of Chelsea FC of England is likely to end the current season as the most improved footballer of the premiership.
His ability and extravagant footballing skills have never been in doubt as it had manifested in his under-age performances since he arrived in England as a starry-eyed 11-year old who had been spirited to safety from Kaduna in Nigeria to escape harm from rampaging Muslim extremists protesting the staging of Miss World contest in Kaduna the political headquarters of northern Nigeria in 2003.

In the mayhem, Moses’ father, a pastor and his wife were killed and their church and houses burnt down while their son was on the dusty streets of Kaduna playing football.

In England the young orphan was adopted by a foster family, a couple from the Carribean with who he lived till the age of 17, and with who he confesses he still has a close relationship.

It was at 13 years that Moses got his first experience of organized football. He recalled that the manager of a team practicing in the park recognized his skills and called him over. The team was a Sunday League youth team, Cosmos 90 FC. The manager was thoroughly impressed and spontaneously enrolled Moses in his team. Quick, strong and flamboyant, Moses operating from the centre-half scored a whopping eight goals for Cosmos 90 FC in his debut.

He was such an exciting player even at that age, that his fame went far and wide, attracting hundreds to Croydon park to see the new soccer wonder kid. On one dramatic occasion the mother of the goalkeeper of an opposing team whom Moses had “humiliated with a nutmeg and a chip in quick succession” could not control her emotion and stormed into the field to beat Moses with her hand bag.

Thus, Moses eventually represented England at all age- grade international meets winning in 2007 the Golden Boots as England reached the finals of U-17 European championship. Moses could have played for England at the senior level but he opted to play for Nigeria despite his bitter experience which he, like the true Christian, had put behind him.

“I am still religious. I am a Christian. That's something that no one can take from me”, Moses said stoically.

This deep Christian faith must have had a hand in the turn-around this season in Moses fortune in his club football. Since joining Chelsea from Crystal Palace in 2012, 25-year old Moses has been routinely loaned out to Liverpool, Stoke City and West Ham. He was even expecting same frustrating routine this season until the Italian manger, Conte, took over from Mourinho.

After the pre-season Conte saw the unique attributes of Moses which the former coaches failed to recognize and assured him that he would not be loaned out.

Switching over to his 3-2-3 formation, Conte deployed Moses to an unsual right wing back position where the Nigerian international had perfectly fitted in, scoring decisive goals in the process.

Moses has been so effective in the current Chelsea team that he has for the first time in his career, won the PFA fans premier League Player of the month award for November.

Indeed former Arsenal midfield star Paul Merson recently rated Moses' contributions to the clubs spring towards this season’s EPL championship as critical as those of Costa and Hasard. This says volumes about Moses quality under Conte’s watch. And should this continue throughout the season and Chelsea win the EPL championship, the chances of Moses winning the next Africa Footballer of the year, is a high probability.

But above all, the lesson to be leant from Moses resurgence is that coaches can make or mar the fate of footballers. Surely, had Mourinho been at the helm of affairs the young Nigerian might have ended up playing in the lower English leagues.

(c) Christian voice newspaper
Posted by ANGLICAN DIOCESE OF OWERRI at 11:37 AM