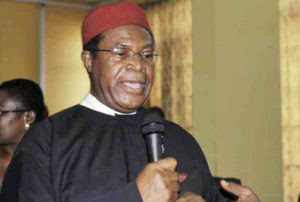 Newly-elected President-General of Ohanaeze Ndigbo, Chief John Nnia Nwodo, has pledged to dialogue with members of the Indigenous People of Biafra (IPOB), so as to bring them to speak in one voice with the Ohanaeze.
He said that his administration in the apex socio-cultural body of Ndigbo would enthrone integrity and make efforts to repatriate Igbo business capitals scattered in the diaspora back to Igbo land.

According to him, “money does not make a man but integrity does”.

Nowodo vowed to die for the cause of Igbo land if necessary.

The new Ohanaeze helmsman, who was one time the Minister of Information and Culture polled 242 votes to defeat his only rival, a former Vice Chancellor, of the old Anambra State University of Technology (ESUTECH), Prof. Chinweyete Ejike, who scored 13 votes.

Barr. Uche Okwukwu, a Rivers State indigene, clinched the post of secretary-general by scoring 166 votes against Chief Isaac Wonwu who got 63 votes while Chief Kroham Joel got four votes.

In his valedictory speech, the former president-General, Chief Enwo Igariwey, charged the new administration to complete the ongoing remodeling of the secretariat being executed by Gov. Rochas Okorocha of Imo State.

Majority preferred the use of Igbo language at the meeting.

Prof. Anya O. Anya, who was chairman of the election committee, urged Ndigbo to reflect and reposition themselves in Nigeria 47 years after the Nigeria/Biafra war.

(c) Christian voice newspaper
Posted by ANGLICAN DIOCESE OF OWERRI at 10:29 AM