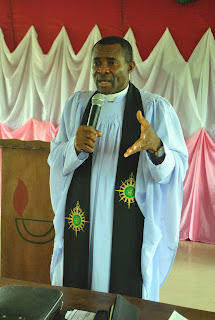 A clergyman, Venerable Mike Amadi, has blamed the ills of this nation today on misplaced priorities and putting square pegs in round holes by those in charge of political leadership of this nation.

Venerable Amadi, who is the Archdeacon in charge, Avu Archdeaconry, Anglican Diocese of Owerri, made this remark while preaching at an Evangelical outreach which the Owerri Council of Knights embarked upon at All Saints Anglican Church, Umuguma, to round off her activities for the year 2016.

The Archdeacon noted that, for a country's leader to go about condemning and cajoling the people he is leading invariably points to the fact that he too is not good.

He counseled the Knights and Ladies to look up to God with unflinching faith in Him as regards to what He can do for them.

Ven. Amadi, who described God as a Master Strategist, affirmed that what God is planning for His people is greater than what the present rulers in government have for the people, citing the plight of pensioners in the country as an instance.

The Cleric who captioned his homily: "Arise and Move On", and drawing his text from Exodus chapter 14:13-15 and Exodus chapter 11:14, challenged the soldiers of Christ, not to be deterred by the worsening economic situation in the country, but to continue their good works of helping the needy and small churches within the Diocese of Owerri and beyond, promising them that God would ever give them the strength, rekindled interest, and the wherewithals with which to do better works in the coming year, in order to attract immeasurable blessings to themselves.

According to him, trusting in God always makes us to move on in life, irrespective of any hindrances and evil interjections.

He used the occasion to appreciate Sir Levi Oguike, an indigene of the area and in whose instrumentality the church was located in its present location.

The Preacher also thanked the priests in his archdeaconry, Rev. Dr. Evans Amadi, the Umuguma Parish Priest, and Rev, Johnson Odiwonma Egbujor, the Station Priest, both of who assisted him in the celebration of the Eucharist at the service, thanking also the Knights and Ladies for coming on evangelism to the church.

In his own remark, the President of the Owerri Council of Knights, Sir Gab Oduah, who was represented at the occasion by one of the Vice Presidents of the Council, Sir Oliver Enwerenem commended the congregation of the church for being able to erect such a big church building for God, despite their small number, and for giving the Council the opportunity to come and worship with them.

The highlight of the service was the individual and collective donations made by the Knights and Ladies as well as the Council at the Service.

Lady Mary Onwudiegwu read the first lesson at the service from Isaiah II: 1-10 while the second lesson which was taken from Romans 15: 4-13 was read by Sir Levi Oguike.

(c) Christian voice newspaper
Posted by ANGLICAN DIOCESE OF OWERRI at 10:55 AM