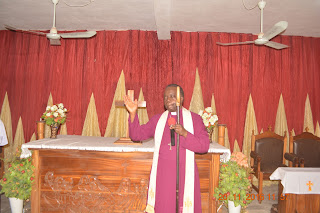 Knights and Ladies of St. Christopher, Church of Nigeria, Anglican Communion, have been charged to be steadfast in faith, and to always show readiness to be true Christ bearers wherever they are.
The Anglican Bishop of Owerri, Rt. Rev. Cyril C. Okorocha Ph.D, who stated this while addressing the Owerri Council of Knights of St. Christopher during their retreat at Christ's Anglican Church Owerri, described the Order as sacred and which, according to him, should always make a marked difference between it and the Knights of the world.

Bishop Okorocha enjoined the Knights and Ladies, to be Christ-bearers wherever they are, in order that they can wear the crown, pointing out that only the Cross of Jesus would take them to heaven.

He asked them to be up and doing as the younger generations were looking up to them.

The Prelate noted that, no good Knight or Lady, can be said to be bearing the Cross if he or she is in a position to pay people their salary or pension, and instead, would prefer to embezzle the money meant for this purpose.

Taking the retreatants on a paper, titled: "Bearing the Light of Christ in our time", one of the Chaplains of the Council, Rev. Canon Echi Nwogu, described Christ as an embodiment of all creations, and warned that anything that is outside God's creation is of the devil.

He noted that God needs everyone of us, as light, so as to make a difference and be able to speak out, in condemnation of wrong doings or misdeeds in the society. While maintaining that the church is supposed to call her erring members to order, the Cleric expressed regret that, many Christians now think less of eternity, while some, he said, sometimes think that they can enter the kingdom of God, anyhow.

Earlier in a brief sermon that preceded the retreat, the Head of the Council's Chaplaincy, Venerable Solomon Okoronkwo, noted that, while a Knight is a defender of the Cross, he is expected to be God-fearing, and one whose life style should be filled with radiance and candour, adding that, our characters, works, and inter-personal relationships, should at all times preach Christ.

The President of the Council, Sir Gab Oduah, in his own remark, commended all those who were able to attend the retreat, in spite of obvious confusions, caused by wrong publication, and shifting up and down the date of the retreat.

The Council's President, urged the Knights and Ladies, to try and be prayerful, especially during the Lenten period, which has just started.

On behalf of the Council, he expressed gratitude to the Bishop, for finding time to come and brief them on the forthcoming dedication of the Cathedral, and its attendant demands on all and sundry in the Diocese, and promised that the Council would do its best towards meeting such demands on the Diocese.


Meanwhile Christians have been charged to avoid spending their time on traditions and frivolities that make them live in darkness.

The Anglican Bishop of Owerri, the Rt. Rev. Cyril C. Okorocha Ph.D gave this charge at the Cathedral Church of the Transfiguration of Our Lord (CATOL) Owerri, while preaching a homily which he captioned: "Look Up".

Bishop Okorocha warned that, to follow such distracting traditions and frivolities, as a Christian, would deny the person the Kingdom of God.

He then called on all to look up away from those things they ordinarily do, and which they find as an alibi, in order to perpetuate wrong deeds, pointing out that, such things which he described as "anxiety neurosis in our lives" , and which according to him tend to rob us of joy and what God has planned for us, has been rolled away by the resurrection of our Saviour Jesus Christ.

The Prelate, argued that in this year of "sovereign intervention by God", there is no reason we should not lift up our heart to the Lord.

Speaking on men and women as pillars in the family, he observed that, though women are very prayerful and more risk bearers, when it has to do with bearing children.

Making reference to children in the family, Bishop Okorocha, averred that it is always better, and a more acceptable norm, for them-to give their parents a befitting life than a befitting burial, in order to attract God's blessings.

Highlight of the service was the inauguration of the CATOL's Local Organising Committee for the two special events, under the chairmanship of Sir Oliver Enwerem. The inauguration was performed by the Bishop.
Posted by ANGLICAN DIOCESE OF OWERRI at 7:13 AM