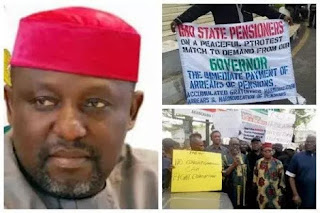 The legal battle between the Nigeria Union of Pensioners (NUP), Imo State Council and the Imo State government over the non-payment of pensions and gratuities commenced in earnest last Tuesday at the National Industrial Court, Owerri before His Lordship, Hon. Justice O.Y. Anuwe.
The suit NICN/Ow/14/2017 had Nigeria Union of Pensioners (NUP), Chief G.U. Ezeji and Evang. L.U. Ashiegbu as plaintiff while Imo State Governor, State Accountant General, State Auditor General, state Attorney General and Commissioner for Justice, and the Head of Service were listed as the defendants.

The NUP and others were represented by a group of lawyers led by Barr. Uche Durueke, while a state Senior Counsel Barr. Osita Chinemere appeared for the Imo State government.

A mild drama ensued before the commencement of proceedings when the presiding judge, Hon. Justice Anuwe sighted intimidating number of Imo pensioners struggling for space inside the court hall with thousand others outside the court premises.

She pleaded with the senior citizens to always come to court on representative basis instead of this mass attendance, sitting their health condition, as many of them where weak and feeble, adding that available space in the court room could not take all of them.

In his submission, the leading counsel for Imo pensioners, Barr Duweke agreed with the presiding judge on the issues he raised.

He said that since the NUP has its branches in all the 27 council areas in Imo state, it would be convenient for each branch to be represented by a member who would always report back each time the case comes up for hearing.

His submission was granted and each branch of the NUP in the 27 council Areas of Imo state was asked to nominate a member, and three members of the state executive council of the union bringing the total of number of NUP members allowed to attend court resinous to 30.

When the case was mentioned for hearing, Counsel to the Imo State government, Barr. Osita pleaded for time to enable him look into the matter properly as the letter informing him of the day's proceeding came late, just on the 25th March, 2017.

However, the leading council to the NUP, Barr. Duweke objected to Barr. Osita's submission, affiancing that the summons was delived on the 15th of March instead of the 25th as claimed by the state counsel. He pleaded with the presiding judge to proceed with the matter.

Barr. Osita maintained that the period of the court summons was short, adding that even if the date was 15th of March, Saturdays and Sundays were not included.

(c) Christian voice newspaper
Posted by ANGLICAN DIOCESE OF OWERRI at 8:19 AM