All you need to know about peptic ulcer 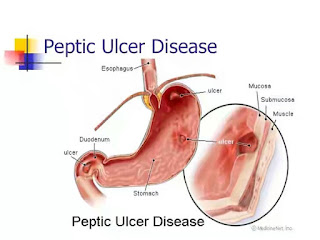 Peptic ulcer is one the most common diseases in civilized countries and probably about one and half million living in Nigeria at the present time have suffered from this condition. An ulcer may form in any part of the digestive tract which is exposed to acid gastric juice, but is commonly found in the stomach (gastric ulcer) in the duodenum (duodenal ulcer) above the point of entry of the alkaline Pancreatic juice.

Occasionally it occurs in the lower end of the Oesophagus or in the jejunum following gastroenterostomy. The term "peptic ulcer" is used because it appears to develop from a loss of ability of the mucosa to withstand the digestive action of pepsin. Peptic Ulcer never arises in tissues exposed to acid gastric secretion. How the healthy mucous membrane is protected from the action of gastric juice is little understood.

Obviously a balance must exit between acid pepsin secretion and mucosal resistance. In patients with gastric ulcer the secretion of acid is often within normal limits, but patients with, duodenal ulcer nearly always have a high output of acid. This is probably accounted for in most cases by a larger than normal number of acid-secreting parietal cells in the gastric mucosa.

Non - beta islet cells of the pancreas stimulates excessive gastric secretion both day and night. Has been paid to the gastric response of the gastric mucosa to its own secretion of enzymes and acid. Mucin is secretal by the gastric and duodenal glands in response to nervous and hormonal influences.

Hereditary factor: In support of a heredity factor are the establish facts that a high proportion of duodenal ulcer patients that belongs to blood group O, and non-secretion of blood group substances have a higher than expected incidence as well.

Possibly the secretion of A and B blood group substances into the gastric juice may have some proactive effects. The close relations of ulcer patients are more liable to develop peptic ulcer than are the relatives of normal people. A family history is frequently found in patients who develop ulcers soon after puberty.

Dietary factors: That cause peptic ulcer is based mostly on epidemiological evidence. The incident of gastric ulcer at duodenal ulcer varies so markedly is different population that they may be taken to be separate diseases.

A focal atrophic gastritis might result from faculty diet. Malnutrition, local irritants, infections ischemia or autoimmune processus. It is five to eight time as common in the as in the women. There factor suggest that nutritional deficiency is unlikely to be of importance in the aetiology of duodenal ulcer.

Constitution and other factors such as Smoking, Feeding habits and the stress and competitional of modern living require careful consideration. On the other hand, in some part of the world where the diet is poor, duodenal ulcer is very prevalent.

A description should be obtained of the various food eaten and of their effects in alleviating or producing the symptoms. Enquiry should be made about the use of drugs, alcohol, tobacco, strong tea and many medicines may irritate the mucosis or disturb the neuromuscular functions of the intestinal tract.

Self medication with proprietary preparations, especially those containing aspirin, is often the cause of dyspepsia. Questions should be directed to finding out whether the patient is living in a state of anxiety induced by social relations at home or at work.

Undue worry: Some financial misfortune may cause undue worry. It is common sense to see if the teeth are mechanically efficient. The reduction of foodstuff to a soft pulp by mastication is a prerequisite to good digestion. It is essential, therefore, to find out whether the patient has sufficient teeth in the mouth and whether these are in the lower and upper jaws as in apposition. If dentures are used they might be comfortable.

Occupational factors: Certain occupation appears to predispose to peptic ulcers. It has been suggested that stress and strain and hurried and irregular meals with the consequent bottling of food and inadequate mastication might be important contributory factor. High incidence occurs in those who are subjected to long hour of strain and whose eating habit are reputed to be very irregular.

1. Take your meal at regular time each Day.

2. Eat your meal slowly and chew your food carefully

3. Avoid rush and hurry before and after meals, if possible rest for a

few minutes before and after eating.

4. Do not smoke or drink alcohol before meals, when the stomach is

5. Avoid large, heavy meals and articles of food which you find

6. Remember that anxiety and worry can upset digestion.

7. See that you get sufficient sleep at night

8. Consult your dentist and Dietician regularly and others.

The following foods are recommended.

(c) Christian voice newspaper
Posted by ANGLICAN DIOCESE OF OWERRI at 2:30 AM