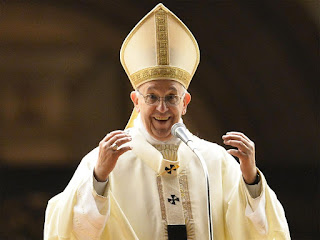 Pope Francis has said he will not "judge" Donald Trump on anything other than how his policies affect the poor.

The interview with Eugenio Scalfari of La Repubblica was headlined in Italian The Republic Pope: 'Trump? I do not judge. I'm Interested only if he hurts the poor'.

Pope Francis told Scalfari: "I do not give judgments on people and politicians, I just want to understand the suffering that their approach causes the poor and excluded."

The Pope said his main concern was for refugees and migrants.

He was concerned about their "suffering and their distress". Unfortunately, he said, attempts to help them were oppsed by those who are afraid of job losses and wage cuts.

The Pope was speaking days before the final big event of his Jubilee Year of Mercy this weekend. Around 4,000 homeless and marginalised people from 22 countries are in Rome for a special audience that was held yesterday and a Mass in St Peter's tomorrow.

Pope Francis admitted there are many poor people in rich countries who fear the immigration from abroad of other poor and deprived people. He said: "It is a vicious circle and it must be stopped. We must break down the walls that divide."

To achieve greater well being, he said, "we need to break down those walls and build bridges that allow a reduction in inequality and an increase in freedom and rights. More rights and more freedom. "

Scalfari has interviewed the Pope before but does not take notes and relies on memory to write up his articles. They met for an hour before the election, on November 7. Scalfari admits in his article that he personally, along with many Italians and Europeans, views the election of Donald Trump as "catastrophic". Italians fear a revived right wing will enable an Italian version of the Brexit referendum.

The switch in the Catholic vote from Democrat to Republican in the US was part of the swing that assured a Trump victory. Trump decisively won a majority of those self-identifying as Catholics, by 52 to 45 per cent. Barack Obama won Catholics by a smaller margin of 50 to 48 per cent in 2012.

Pope Francis added: "What we want is a fight against inequality. This is the greatest evil that exists in the world." He also attacked the culture of wealth, and Scalfari asked if he was propagating Marxist ideology.

The Pope acknowledged that this has been levelled at him often. "My response has always been that, if anything, it is the communists who think like Christians," Francis replied. "Christ spoke of a society where the poor, the weak, the marginalised are empowered... it is they who must help to achieve equality and freedom.”


... And Boko Haram warns him, says ‘war is just beginning’

A faction of the Nigeria-based terror group Boko Haram has warned US president-elect Donald Trump that "the war has just begun". The faction leader, Abubakar Shekau, made the comment in an audio recording posted on social media on Sunday.

"Do not be overwhelmed by people like Donald Trump and the global coalition fighting our brethren in Iraq, Syria, Afghanistan and everywhere. We remain steadfast on our faith and we will not stop. To us, the war has just begun," Shekau was quoted by the Sahara Reporters website as saying.

"We're done with Obama, now we're going to start with Trump... we remain convinced by our faith and we will not stop. For us, the war is just beginning,"Shekau added, according to news agency AFP.

It is also believed that Shekau claimed responsibility for an attack that resulted in the death of some Nigerians soldiers, including Lieutenant-Colonel Muhammad Abu Ali, earlier in November.

The Islamist fighter made the remarks days after Republican Trump defeated Democratic presidential candidate Hillary Clinton for the US presidency.

(c) Christian voice newspaper
Posted by ANGLICAN DIOCESE OF OWERRI at 10:43 AM