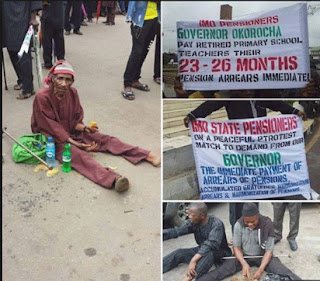 Pensioners in Imo State opened a fresh war-front with the government when they rejected a move to slash their pensions to 40 percent.


The outright rejection of the proposal by the Gov. Rochas Okorocha – led administration came as part of the resolutions of members of the Nigerian Union of Pensions (NUP), Imo State, after their emergency state council meeting in Owerri, capital of Imo State.

A release to this effect, signed by the State Chairman of NUP, Chief G.U. Ezeji, and Secretary, Evang. Livinus Ashiegbu, expressed the pensioners' resolve to carry out mass demonstrations on December 11 and 12, 2016 being Pensioners' Day.

“We say capital 'No' to any partial payment of pensions and gratuities. The proposal to pay 40% and write off the 60% of pension arrears is unacceptable to Imo State pensioners,” the release stated.

NUP also called for the use of constitutional bodies, such as the Accountant General and the Local Government Pension Board, in paying pensions and gratuities.

The Okorocha administration had used the Community Government Councils (CGCs), headed by traditional rulers, to pay the pensioners since its inception.

They also reminded the government that pensioners do not pay tax by law, and vowed to resist any attempt to use traditional rulers to force pensioners to pay tax.

NUP, according to the statement, will write President Muhammadu Buhari, Senate President Bukola Saraki and speaker of the House of Reps, Hon. Yakubu Dogara, on the issue.


It also mandated all its branches to take the case to legislators representing their constituencies while it frowned at the omission of 2000 pensioners in the August 2016 payment, as well as the government's meeting with traditional rulers on pension matters with the exclusion of the union members.

(c) Christian voice newspaper
Posted by ANGLICAN DIOCESE OF OWERRI at 8:53 AM