The plight of Imo pensioners 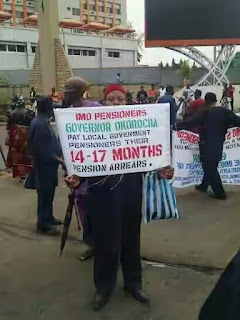 Once, the major attraction in working in government ministries, departments and agencies was the unfailing certainty of payment of bulk-some gratuities and monthly pensions after meritorious service. Indeed, the parameter for assessing the quality of any employment was whether it was pensionable or not.


Then, because retirees from government services received these payments promptly, they aged gracefully, affluently and contentedly  till death inevitably called.

Sadly, it is no longer the case today as these senior citizens who expended their youthful years serving the nation or the state as the case may be, wallow in utter penury with their retirement benefits unpaid for months and even for years.

The trend these days is to call out these frail old men and women for endless re-validation exercises that yield no results and in the process diminishing their hope that their plight would soon come to an end. And such a state of hopelessness leads to tragic psychological trauma.

Such a situation played out recently in Imo State when the senior citizens were asked to go to their pay points to collect their pensions with the announcement  earlier that over N12 billion had been mapped out for the payment.

The retirees’ dependants, friends and all those pained by their plights were filled with hope that the long-suffering senior citizens would be paid many months of arrears of their outstanding dues which would obviously go a long way in stabilizing them.

Unfortunately, reports confirmed that only one month arrears of pension was paid them. Worse still, many of them who were alleged not to have been captured in the re-validation exercises were skipped.

Worse still, the month’s arrears were not paid in full as only 70% was paid.
Reacting to the development, the Body of Retired Permanent Secretaries of Imo State  stated  that “many pensioners have died out of starvation and sickness because of the inability to afford medications while their dependants have been subjected to untold hardship.

The retired permanent secretaries described the treatment meted out to them by the state government as callous and unconscionable adding also that “this embarrassment is unimaginable and the damage unquantifiable”.

They contended also that the treatment meted out to them is unconstitutional as they did not protect the pensioners’ right quoting section 210 of the constitution of the Federal Republic of Nigeria.

In this context, the case of the workers of Imo Newspapers comes into mind. By acquiring the assets of the newspaper and converting them into ICAPS, the Imo state government effectively failed to inherit the liabilities by abandoning the staff through non-payment of their gratuities as they are not entitled to pensions.

As at the last count, 30 of the workers have died obviously out of frustration, hunger and general lack of means to keep body and soul together.

Government's indifference to the pathetic plight of pensioners in Imo State is unacceptable.

For instance, the senior citizens and others in distress at these economic hard times cannot be impressed by the on-going massive road construction in Owerri metropolis in the name of urban renewal.

It is the view of many observers that part of the huge amounts expended on such projects should be diverted to saving the lives of pensioners by settling the chunk of arrears of pensions owed these senior citizens who have passed their active years.

(c) Christian voice newspaper
Posted by ANGLICAN DIOCESE OF OWERRI at 2:07 AM