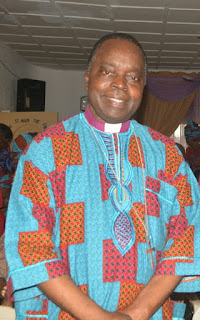 Plans are now at advanced stage for the students of Peace College, along Port Harcourt Road, Owerri Imo State to commence sitting for the London Cambridge Certificate Examination immediately on the completion of their six-year secondary school education at the college.
The Anglican Bishop of Owerrri, Rt. Rev. Cyril C. Okorocha Ph.D, disclosed this at a midweek service held at the Chapel of St. Mark the Evangelist, Bishop's Bourne, Owerri while addressing the newly ordained Priests, Canons and Archdeacons who, among other faithful, were at the Chapel for their thanksgiving.

Bishop Okorocha rated the Peace College as one of the best colleges in the country today because, according to him, the Cambridge officials who visited the country recently, described the college as a place they can trust, as well as an institution where examinations are conducted or written without "expo".

He also disclosed that plans were underway to recruit more teachers and a Matron into the college, to beef up teaching, learning and discipline in the school, and used the occasion to announce the Proprietor's award of scholarship to the children of some Owerri Diocesan priests who, he said, are studying in the school. The scholarship award, he said, will take effect from September, 2017. He frowned at some of the priests in the Diocese who, he said, prefer to pay huge sums of money to train their children somewhere else.

On the part of the newly ordained priests, he warned them to eschew what he described as "aghughoism" in the course of their priestly duties, and never to try to wed any couple without preparing or counseling such couple for about a period of three months.

The Prelate challenged the priests, not to do anything that would put their integrity to question, or deny them safety in the hollow of the hands of the Almighty God, describing as worrisome, the kind of dishonesty and hypocrisy prevalently witnessed in the country today.

In their separate remarks, Rev. Bethel Ibezimako Ohagwam, on behalf of the Deacons and Priests, and Venerable Chimezie C. Onyenuma, on behalf of the Canons and Archdeacons, expressed profound gratitude to the Lord Bishop and Mama Owerri, for their kind and invaluable assistance, and care in several ways to them, and prayed God to strengthen them in their episcopacy and ministries, as well as give them good health and longevity. They also asked for God's love and protection unto the Archdeacons and Canons who took them through the vast areas of their training, especially the Clerical Synod Secretary for his untiring efforts during the training session.

The thanksgiving service was characterized by many testimonies of God's grace.

(c) Christian voice newspaper
Posted by ANGLICAN DIOCESE OF OWERRI at 11:20 AM