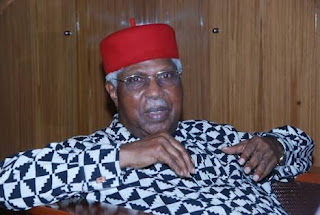 Various groups and individuals have been speaking on the death of former Vice President Alex Ekwueme who died recently at a London hospital.
The latest was the campaign for Democracy (CD) which blamed the Federal Government for the death of the statesman.

In a statement, the National Publicity Secretary of CD and its chairman in South East, Dede Uzor A. Uzor, alleged that the Federal Government flew Ekwueme to London when his health had stabilized and “abandoned him to his fate there”.

He drew attention to the secretary to the Federal Government's press statement that the FG would not take responsibility for his medical bills, despite that he was a former vice president of the nation.

Uzor said that Section 180 of the 1999 Constitution, as amended, warranted Ekwueme's medicals to be paid by the Nigerian government.

“When the former vice president heard that his bills were not going to be footed by the government, he felt disappointed and collapsed and died”, he said.

The CD boss stated that Dr. Ekwueme had been looking after himself since retirement and wondered why the FG did not leave him to continue to take care of himself.

“Why must Federal Government get involved this time, only to abandon him where they had taken him to and allowed him to die there,” he stated.

CD’s allegation could not be confirmed as at time of going to press. But competent sources described as untrue the allegation that FG abandoned the former vice president in London.

Ibori, through a statement by his spokesman Tony Eluemunor, stated that Nigeria betrayed the efforts of Ekwueme to rescue the nation from political and economic morass, adding that the nation was the biggest loser in the former vice president's death.

He described him as “an extraordinarily polyvalent scholar who earned multiple degrees in Architecture, urban planning, sociology, history, philosophy and law from several universities.

Meanwhile, the Federal Government has inaugurated a committee for the burial of the late Vice President, promising also to offset the cost of transporting his remains from London as well as other burial bills.

Secretary to the Government of the Federation (SGF) and chairman of the committee Boss Mustapha, who announced this at the inauguration of the committee, eulogised former Vice President Ekwueme as someone who served his fatherland meritoriously.

Others are Pastor Goodhear Obi Ekwueme, Secretary to the State Government (Anambra), Prof. Osita Chukwulobelu and the Permanent Secretary, General Services Office, Dr. Roy Ugo, who will serve as the committee secretary.

(c) Christian Voice Newspaper
Posted by ANGLICAN DIOCESE OF OWERRI at 8:06 AM