Politicians can mess you up - Bishop warns religious leaders 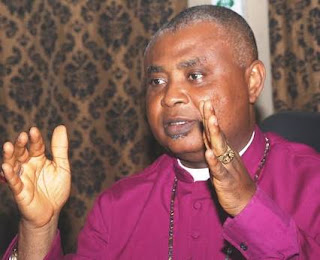 Religious leaders have been charged to beware of the antics of politicians which tend to subvert their authority and influence among the people of God.
The Imo State chairman of Christian Council of Nigeria (CCN) and Bishop of Isi Mbano Anglican Diocese, the Rt. Rev. Godson Ukanwa PhD (JP) gave the charge at the 2017 Christian Cantata of the CCN held at the Cathedral Church of Christ, Ezihe, Isiala Mbano.

Bishop Ukanwa noted that political leaders now undermine the church in the affairs of the citizens, contrary to what obtained in the past when they consulted the church in spiritual and social matters.

He described the cantata as a period when Christians of various church denominations gather and sing praises to God, adding that it launches Christians into another liturgical year known as the Advent, reflecting tidings of holiness in the birth of Jesus Christ.

The prelate called on the church to speak out against the ills in the society as they are the conscience of the people, stressing the need to pray for the nation at this “difficult times”.

He called on government to ensure a peaceful Yuletide by providing adequate security for the people.

In his sermon at the occasion, based on the theme, “Behold, Jesus comes in His Glory” (Rev. 22:12) Rev. Canon TrustinGod S.O. Ibeawuchi, stated that the Advent is about the history of the birth of Jesus Christ and the living expectation that He is coming again (Rev. 22:12; Cols 1:27).

He called on Christians to get ready for eternity, while also urging them to be agent of the transformation of Nigeria.

A highlight of the occasion was the award of honours to some members who distinguished themselves in the service of the orgnisation.

Bishop Ukanwa also inaugurated the youth wing executive of CCN at the occasion.

In attendance were the chairman of the organizing Committee, Rev. C.C. Benaiah and the secretary, Rev. Canon Basil Enwerem, Ven. Emma Anyiam who moderated the event with Bro. Nkeiruka Nwike, among others, who Bishop Ukanwa commended highly.