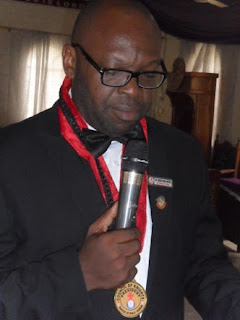 Christians have been enjoined to closely monitor what their family members watch in the internet, televisions and other electronic media so as to ensure that godly values are maintained.
The President of Council of Knights of St. Christopher, Anglican Diocese of Ohaji/Egbema, Engr. Ogechi Ikpemo, gave the charge during the 2017 Chapter Meeting/Conference of the council which ended recently at the Cathedral Church of St. Peter Umuokanne in Ohaji Imo State.

While calling on members to revalidate their membership of the council and re-invigorate their service to God, Sir Ikpemo reeled out the achievements of the new council executives within the short period it had been in charge of administration.

The theme of the President's address was Come Let us rebuild walls of Jerusalem (Nehemiah 2: 17) in which he also enjoined Christians to learn vital lessons in the service of God and humanity.

The former Head of Department of Civil Engineering, Imo State Polytechnic Umuagwo, congratulated some members of the council who were recently elevated to various positions. They include Sir Emperor Iwuala recently appointed Senior Special Assistant to the Governor of Abia State on Media, Sir Emmanuel Assor, as the traditional ruler of Assa Community Ohaji Imo State, Sir Emma Odunze as traditional ruler of Obitti Community also in Ohaji and a host of others who were conferred with various honours.

In his own remarks later at the event, the Bishop of the diocese, the Rt. Rev. Collins Oparaojiaku, who was at the occasion with his wife Mrs. Joy Oparaojiaku, commended the people of the diocese for their zeal in the service of God and enjoined the knights to support the on-going new cathedral building project in Umuokanne.

While commending Sir Ikpemo for his good leadership, godly and intellectual qualities, Sir Emperor Iwuala fondly recalled that the don was his Deputy Senior Prefect at Archdeacon Dennis Junior Seminary (ADJS) Mbieri in Mbaitoli Imo State remarking that he was certain that the council would benefit a lot from Ikpemo's administration.

He also described Bishop Oparaojiaku as a highly enlightened, sophisticated and educated spiritual leader whom he said had contributed a lot to the growth of the church.

In attendance also were the parents of Sir Ikpemo, the Venerable Shedrack and Mrs Ikpemo, Venerable Uche Nkemdirim, Ven. Ebens Onyeahialam, Mr. Sam Macaulay, Sir Uche Uhuegbu and a host of others.

The bishop later laid the foundation for a secretariat complex for the knights at the Cathedral ground.

The occasion was rounded off with a rededication church service at the cathedral.