Chinese Christians On Trial For Spying As Crackdown On Churches Continues

Two members of a Chinese house church have been tried on charges spying, with a third member accused of "illegal business activities".

The trial took place at the Guiyang Intermediate People's Court, in the southwestern province of Guizhou. Other members of the Huoshi Church, of which the three accused are a part, say this is just the latest in a crackdown on their church from the police and state officials.

One church member, who attended Wang's trial, said: "Wang Yao's family weren't allowed to attend the trial, and neither were two lawyers hired by her family to defend her."

They added: "There have been people watching me in the past few days from my neighborhood committee and the local police station... They follow me wherever I go. The police have placed very tight controls on all Huoshi Church members."

Li Hongmin, the third church member to stand trial, is accused of printing more than 11,000 copies of Protestant tracts for distribution.

Li pleaded not guilty to the charges, and his lawyers defended him on the grounds of his constitutional right to freedom of religion.

The pastor of Huoshi Church, Yang Hua, was arrested in December last year and faces charging of "deliberately leaking state secrets". His lawyers report that he is suffering serious health problems following torture during his incarceration.

They are now suing for the use of "torture to extort a confession".

The CCP is believed by human rights campaigners to be becoming increasingly concerned about the influence of Christianity in the country. A report published by China Aid earlier this year found that persecution against Christians in the country has increased sevenfold since 2008.

The rules include bans on preaching or running religious events in schools and on "providing religious services online."

There are also prohibitions against "organising citizens to attend religious training, conferences, and activities overseas." 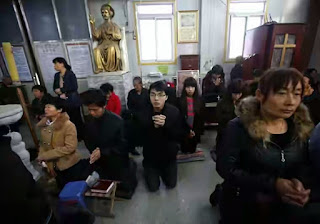 Posted by ANGLICAN DIOCESE OF OWERRI at 4:33 AM