He loved them in spite of their failure.

One of the first things Jesus did after His resurrection was to go looking for the disciples who’d failed Him so badly. ‘On the evening of that first day of the week, when the disciples were together, with the doors locked for fear of the Jews, Jesus came and stood among them and said, “Peace be with you!”

After he said this, he showed them his hands and side. The disciples were overjoyed when they saw the Lord. Again Jesus said, “Peace be with you! As the Father has sent me, I am sending you”’ (vv. 19-21 NIV 1984 Edition).

Among the group was Peter, who’d walked on water, whose hands had distributed miracle food to five thousand hungry people, who’d witnessed Moses and Elijah standing next to Jesus on the Mount of Transfiguration. Big, bold, brave Peter who said, ‘Even if I have to die with you … I will never deny you!’ (Matthew 26:35 NLT). And he wasn’t the only one. ‘All the other disciples vowed the same’ (v. 35 NLT).

Yet the record reads, ‘All his disciples deserted him and ran away’ (Mark 14:50 NLT). Saint John, Saint Andrew, and Saint James - all guys depicted on the stained glass windows of churches worldwide - abandoned Jesus when He needed them most.

Yet when He rose from the dead, He never once brought it up. Instead: ‘He showed them His [wounded] hands’ (John 20:20 NKJV). Why?

To let them know He loved them in spite of their failure. Instead of disowning them, He said, ‘As the Father has sent Me, I also send you’ (v. 21 NKJV), And today He’s saying the same to you! 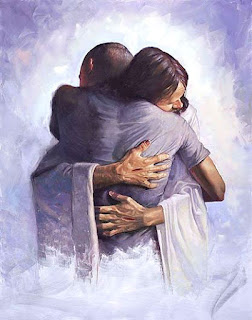 Posted by ANGLICAN DIOCESE OF OWERRI at 11:23 AM