Persecution will not deter the church: Chinese Megachurch Pastor Released After Seven Years In Prison

A megachurch pastor who was arrested and imprisoned seven years ago for protesting the demolition of a house church in China has been released, according to reports.

Christian persecution watchdog China Aid reports that Pastor Yang Rongli was arrested along with her husband in 2009.

They had been travelling to their hometown of Linfen in Shanxi province, where a church was set for demolition by the authorities, following a prayer rally they had organised on September 14.

Pastor Yang and her husband, Wang Xiaoguang, were sentenced to seven and three years in prison respectively on charges of "gathering a mob to disturb public order", and ordered to pay a fine of 40,000 Yuan (US $5,860).

Two years of that prison sentence was to be served in a labour camp.

According to China Aid, Yang was released on October 10 but "showed physical signs of the brutality she endured while incarcerated".

Her hair had greyed "due to malnutrition and a lack of sunlight", the charity reports, and she is suffering from diabetes, kidney stones and a heart problem.

She remains under government restrictions and was therefore unavailable for interview.

The ruling Chinese Communist Party is believed by human rights campaigners to be becoming increasingly concerned about the influence of Christianity in the country. A report published by China Aid earlier this year found that persecution against Christians in the country has increased sevenfold since 2008.

Up to 1,700 churches have been demolished or had their crosses removed in the province over the past two years and hundreds of human rights activists, lawyers and pastors have been arrested.

In July, parents who attended one house church in Guizhou were told if they didn't stop bringing their children to church, they would not be allowed to attend college or a military academy.

In addition, anyone who brought a minor to church was warned they would be sued. 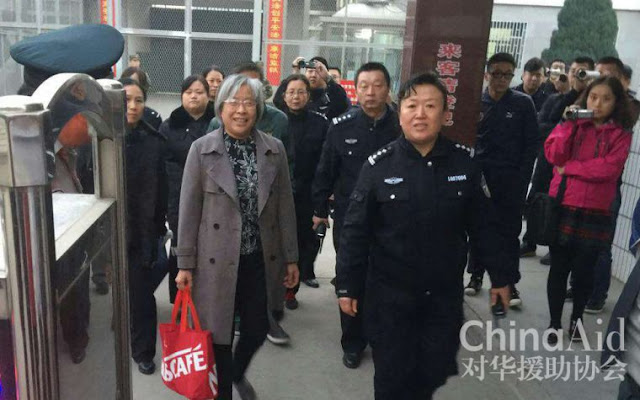 Posted by ANGLICAN DIOCESE OF OWERRI at 3:27 AM