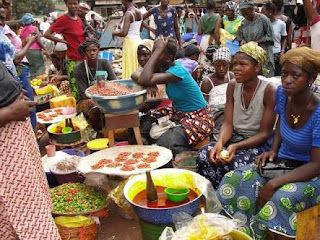 An economic consultant has called for the return to a 2009 strategy document of food security released by the federal government, saying that government policies are to blame for the present food crisis in the country.
Anogwi Anyanwu, who spoke recently at a Channels Television programme said that the food price hike had nothing to do with a 5% interest rate in the agriculture sector.

“What is causing food crisis is government policies and the inability of the government to have a unified plan on how to manage the increasing prices of food stuff.

Anyanwu, who is also the former Executive Director of Spring Bank, however commended the Federal Government over the mandate given to the food task force which was set up recently

“I want to commend the Federal Executive Council for talking about the rising prices of foodstuff; at least that shows that they are feeling what the people are feeling.”

He, however said he hopes that the move is not just a political action, intended to make the people feel like the government cares whereas, they end up not really doing anything.

According to him. “What they have set out to do, is not something you can do in one week”.

Recalling the increase in food prices between the year 2007 and 2008, he said because Nigeria was a net importer of food, commodity prices including oil prices went up significantly.

Furthermore, he stated that: “the government at that time was scared that there was going to be a food crisis and several hearings were held by the Senate as well as the Federal House of Representatives.

“The Federal Ministry of Agriculture and Water Resources at that time, held several seminars, the President at that time, had meetings with the 36 state governors and all of them were talking about how to avert a food crisis.”

According to him, in 2009, “the government came up with a strategy document of food security. That document was dusted up in 2011 when the last administration came in.

“The Minister of Agriculture at that time, came up with the Agric Transformation Agenda which had several components including the growth enhancement scheme, including the seed scheme that gave farmers improved seedlings, including the plans to build rice mills and silos all over the country.

“I don't know the impact of this, I don't know whether they had been continued or those programmes had been abandoned.

He continued: “When speaking of food security, there are long term, medium and short term measures.

“The government cannot legislate the prices of food or any commodity for that matter. Government can only take action that makes the forces of demand and supply to have an appropriate pricing for anything including foodstuff.”

Mr Anyanwu absolved the financial world, saying: “There are several progammes such as the Agric Credit Guarantee Scheme, the Growth Enhancement Scheme and the fertilizer scheme, whereby government ensured that the fertiliser subsidy was going directly to farmers.

“I do not think that the banks would frustrate any programme that is meant to improve the economy of this country.”

According to him, “the banks play leading roles and the even in the growth enhancement scheme, the banks came together and provided 200bn Naira for lending to farmers.

He however added that “the bank will not lend to the small scale farmer – the bank would lend to a farmer that is properly structured, that has documents that he can present as collateral.

“If you own a farm and you don't have a Certificate of Occupancy (CoO), what are you going to present to the bank to loan you money,” he questioned.

Posted by ANGLICAN DIOCESE OF OWERRI at 1:31 AM