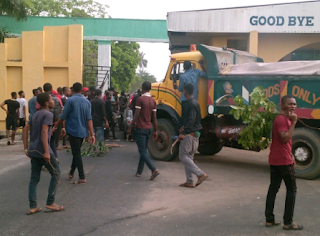 Federal University of Technology Owerri (FUTO) Vice Chancellor, Prof. Francis Eze, has alleged that the recent protest by students in the institution was sponsored.
Speaking to newsmen on the issue, the vice chancellor said that he had never witnessed such as act since his 27 years service in FUTO, adding that the management had no problem with the students before the incident.

According to him, he had maintained an open-door policy since his inception as vice chancellor, warning that due process must be followed when a peaceful protest is to be held in the school.

He said that non-students who are traced to the protest would be prosecuted while the 37 students identified to be involved in the mayhem would be handled according to the institution's regulations.

The vice chancellor said that the protest was as a result of management decision to improve some services, including equipping the ICT Department, for which the students were asked to pay N19,000 instead of N8,000 they were paying.

He also said that the institution had proposed vehicle shuttle services within the campus to replace commercial motorcyclists whose activities posed danger in the campus, and that the students were asked to pay N5,000 each.

The Vice Chancellor said that both the management and students union government agreed on these issues.

He said that only FUTO provides hostel accommodation for students at N10,000 and N12,000 which is the cheapest, saying also that no tuition fee is charged in the institution apart from N40,000 acceptance fee for fresh students.

Vice Chancellor Eze commended the law enforcement agencies for the way they handled the situation.