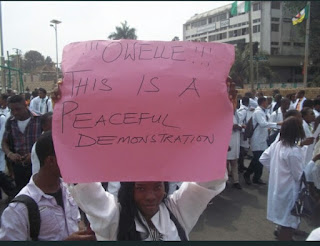 Medical students of the Imo State University (IMSU) whose careers have been threatened by the failure of the College of Medicine in the last accreditation exercise of the Medical and Dental Council of Nigeria, have resorted to wooing Gov. Rochas Okorocha of the state.

The students, recently, worshipped at the Chapel in the Government House, Owerri offered their thanksgiving and seized the opportunity to meet the governor for discussions on their plight.

One of the students who was part of the delegation to the Chapel told Christian Voice that they had meaningful tete-a-tete with the governor who promised to look into their problems.

“It was the only way we could get access to the governor since a peaceful protest last year ended in fiasco”, the student who refused to disclose his name said.

Three months after the council had written to the university to stop further examinations in the Pharmacology and Therapeutics and the Pathology departments due to deficiencies of shortage of manpower and structural defects of buildings, the university is yet to do anything to remedy the situation.

The letter, signed by the council's Registrar, Dr Abdulmumuni Ibrahim, stated that the deficiencies should be rectified within six months and the council invited for verification.

The affected students, who have already spent eight years in the school, are jittery that the problem would further hamper their graduation.

Medicine is a six-year course, but such exigencies had caused the student of the college to spend 10 to 12 years before graduation.

The students also complain that the doctors in the university's teaching hospital (IMSUTH) Orlu, are ill motivated to teach because their pay has been slashed by government and necessary allowances removed.

Besides, the entire IMSUTH staff are being owed six months salaries, not to talk of the general slash of emoluments by 70% and below.

Meanwhile, doctors in the state recently threatened to shut down medical services if the government failed to address problems militating against state-owned medical facilities.

The Nigeria Medical Association (NMA) state chairman, Dr. Darlington Akukwu, told journalists in Owerri that the doctors were particularly agitated at the under-funding of the Imo State University Teaching Hospital (IMSUTH) where students now spend longer years to graduate, among other grievances.

According to Dr Akukwu, the under-funding of IMSUTH Orlu has led to the loss of accreditation of vital clinical departments and the college of Medicine.

He decried the non-implementation of the revised salary structure (CONMESS) for the doctors and the lack of sufficient infrastructure and motorable roads in IMSUTH.

The NMA Chairman said that civil service rules are being flouted while government functionaries intimidate, humiliate and harass workers in the hospital.

It called for the immediate halt of concessioning of government hospitals.

The Association, however, gave the government a 21-day ultimatum to address the issues; otherwise, industrial harmony may not be guaranteed.

The ultimatum expired on March 21.

Other workers at IMSUTH have suffered financial difficulties as some who borrowed money from the banks based on their full salaries go home without a kobo each time any money drops in their bank accounts based on the 70% salary structure.

A worker hoped that the government would use the latest fund released by the federal government to states to put a little smile on their faces.

(c) Christian voice newspaper
Posted by ANGLICAN DIOCESE OF OWERRI at 7:08 AM