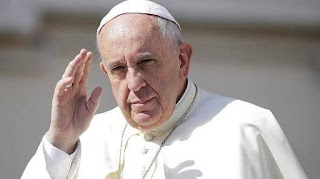 Pope Francis will make a historic visit to an Anglican Church in Rome today. He'll join the congregation at the Church of England chaplaincy of All Saints for a short Choral Evensong service; it will include the blessing of a specially commissioned icon and the twinning of All Saints with the Catholic parish of Ognissanti, a Rome church with strong ecumenical ties.


The event comes as part of the 200th anniversary celebrations for All Saints which began with a small group of worshippers holding the first Church of England liturgy on October 27th 1816. The current church, close to the Spanish steps, was built over half a century later, designed by one of the most famous British architects of the Victorian era, George Edmund Street. All Saints is the largest Anglican congregation in Italy and part of the Diocese in Europe.

The church, led by its chaplain, Rev. Jonathan Boardman, and assistant chaplain, Rev. Dana English, was recently granted legal recognition from the Italian State. Diocesan Bishop Robert Innes will be welcoming Pope Francis, together with his suffragan Bishop David Hamid.

During the afternoon liturgy, Pope Francis will deliver a homily and afterwards he will answer questions from members of the congregation. The icon of St Saviour, which will be blessed during the papal visit, has been commissioned and made for the 200th anniversary by a British artist, Ian Knowles, director of the Bethlehem Icon Centre.

Located on the site of a former Augustinian convent, All Saints church was built during the 1880s. During the excavation of the site, two bronze heads, a mask of the emperor Nero and a head of leading Roman noblewoman, Agrippina the Elder, were discovered and later presented to Rome's Capitoline Museums. The foundation stone was laid on Easter Day in 1882 and the first Eucharist was celebrated five years later on Easter Sunday 1887. The neo-Gothic church is noted for its white travertine spire, its marbled columns and arches, and its fine stained glass windows depicting the lives of the saints and martyrs. One of these windows portrays the English monk St Bede, from whose commentaries Pope Francis chose his own Episcopal motto.

The Catholic parish of Ognissanti on the Via Appia Nuova is the titular church of Cardinal Walter Kasper, former president of the Pontifical Council for Promoting Christian Unity. On March 7th 1965, Pope Paul VI celebrated the first Mass in Italian there, following the liturgical reforms of the Second Vatican Council.
Posted by ANGLICAN DIOCESE OF OWERRI at 1:12 AM