Food prices may go down soon ... As FG moves to bring succor to the masses 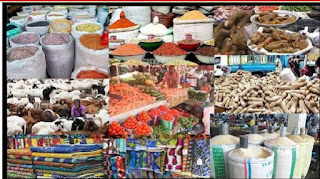 Food prices are expected to come down soon, as the Federal Government has set up a high powered inter-ministerial task force to look to bring succor to the suffering masses.
The Finance Minister, Kemi Adeosun, disclosed this when she spoke to newsmen recently in Abuja, after a Federal Executive Council (FEC) meeting presided over by Vice President Yemi Osinbajo.

The taskforce, headed by the Agriculture Minister, Chief Audu Ogbeh, has one week to submit its report.

A presidential aide on Sustainable Development Goals (SDGs) would also be member. Part of the FEC decisions also was that Value Added Tax (VAT) on luxury items should be raised.

The new tax policy is a revised version of the 2012 edition which will capture all existing taxes in the country.

This is coming on the heels of a proposed mass protest today to be led by popular musician, Innocent '2face' Idibia in Lagos.

EKITI State Governor Ayo FAyose, and others have indicated their support for the protest aimed at putting pressure on the government to check the rising cost of living in the country.