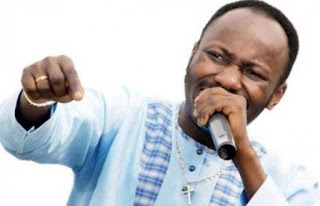 
I am a Christian. I am the son of a pastor. My creed and breeding predisposes me to denounce bloodshed and defend the incomparable value of human life. All the same, I support the controversial 'inciting' sermon of Apostle Johnson Suleman.


Suleman, leader of a thriving church in Auchi, Edo state, recently decried the unqualified freedom with which murderous herdsmen were killing Nigerians and advised his members that it was right and proper to deal with the terrorist before he laughs first.

Since a video clip of Suleman's commentary on the killer herdsmen went viral, Nigerians seem to have been liberated to discuss the elephant in the room. People are beginning to feel empowered to opine on a present and potent security threat the government is awkwardly avoiding. The cowardly skirting of the collective has ceased. The public domain is now resonating with a chaotic debate of the menace of the nihilists.

The wide currency of Suleman's view on the hot button issue obviously scared the State Security Service into action. As has become their obnoxious tradition, the DSS tried to arrest him at midnight. The presumably smart DSS agents did not have the courtesy to invite him. They chose to go and pick him up when he was most likely to be fast asleep in his pajamas. The intent was to demystify Suleman as a weak catch and to scramble the schedule of the preacher who was in Ekiti for a well-publicized religious engagement.

After a distress call from Suleman to the governor of Etiki State foiled the plot, the DSS beat a shameful retreat and resorted to the afterthought of extending an invitation for an interview to Suleman.

He  honored the DSS invitation and admittedly justified his sermon. But the frenetic reaction of the DSS to Suleman's sermon raises a serious question.

Why is a DSS that has never taken a credible step towards confronting the prolific headhunters working itself into a lather because a reasonable man counseled his audience to choose self defense whenever they encounter a terrorist? Why is a redundant DSS that has no record of successfully aborting any attack by the herdsmen scapegoating Suleman because the gentleman recommended that his members not surrender like a sacrificial lamb when the vampires come to slay.

When an issue relates to the policy and politics of President Buhari, the DSS goes into overdrive. Her agents would invade the homes of judges at midnight so as to be seen as a crucial player in the war against corruption. Her agents would raid the office of Nigerians planning an anti-government protest at midnight just to be seen as protecting the boss. But not once has the DSS channeled its penchant for nocturnal disruption against herdsmen who mostly strike in the night.

Fulani herdsmen have perpetrated countless scorched earth attacks on peaceful and predominantly Christian communities under Buhari's watch. His response to the destruction of lives and livelihoods has largely been silence. He just pretends to be blissfully ignorant.

This hypocrisy is deplorable because we now know Buhari's relationship with Nigerian news transcends the cartoon section of our national dailies. He says he loves to watch a certain local TV only less than he likes to visit a foreign hospital!

The irony is that the TV station Buhari affects love for has been dutifully reporting the scourge of the Fulani herdsmen. But he watches the news, observes the ghouls turning the country he governs into an abattoir… and he goes to sleep!

After the herdsmen sneaked into some villages in Southern Kaduna on Christmas eve and Christmas day and killed to their heart's content, the president's spokesman appeared on his principal's favorite TV channel, and told the bereaved, Nigerians and the world at large that the commander-in-chief would not comment on the carnage. Femi Adesina didn't whisper that with a fumbling voice. He declaimed it with the authority of an assistant echoing the chief's position.

Following Adesina's lead, the Inspector General of Police, Ibrahim Idris, improved on the administration's line. He claimed the casualty figure of 800 people put out by the Christian Association of Nigeria was exaggerated. The minister of Interior, Abdulrahman Dambazzau, asked pastors of the slain and stewards of the burnt churches to stop lamenting in public. Dambazzau said the Christian clergy was escalating the crisis by indulging in 'hate speech' and giving religious colouration to the massacre.

The Council of Imams and Ulamas in Kaduna state maintained that official line. They said Christians were massaging statistics. The survivors were loudly supersizing a small loss instead of mourning with muzzled mouths.
The Suleman sermon should never have happened. It was unilaterally forced by the Buhari administration. A government that is demonstrably more solicitous of Fulani headhunters than the victims created the content of the 'inciting' homily.

If this government and the security agencies under its control were conscientiously treating the mass murderers according to the magnitude of their crime and bringing them to justice, Suleman would have had no reason to openly advocate self-defense. The government put the 'inciting' sermon into his mouth!

The Buhari government is actually guilty of what it accused Suleman of. The government is nudging Nigerians to violence. Its appalling handling of the headhunters is provocative. It abundantly telegraphs that, in the Manichaean battle between the herdsmen and the people, the state is rooting for genocide!

In October 2015, Vice President Yemi Osibanjo told Nigerians in a Townhall meeting in Texas that Nigerian security agencies had arrested "about 800 violent herdsmen" in connection with the bloody attacks across the land. Osibanjo said the sluggish pace of the judicial system was ''affecting'' their prompt trial. A clear three months after the professor of law said this, prosecution of the ''violent herdsmen'' has yet to begin.

That's more 'inciting' than any sermon!
Granted, Suleman tends to be feisty behind the pulpit. But the Metropolitan Archbishop of Catholic Diocese of Abuja, John Cadinal Onaiyekan is a renowned sage. The peaceable and reflective Onaiyekan has also suggested that self defense is the need of the hour. He advised that Nigerians must do better than "sit down and allow themselves to be killed" by the herdsmen.

This is an era of survivalism. Every voice of reason should project the basic wisdom of self-defense. Under the circumstances, it would be foolhardy for a Nigerian to be so carefree as to trust that this administration is ready to protect them from the heartless headhunters.

The DSS and the Buhari government are essentially trying to impose a gag order. "Don't speak ill of the terrorist herdsmen. Don't tell Nigerians not to be too afraid to dramatize self-love through self-defense. Any remark that diverges from the pacifist manifesto is hate speech."

The government is purporting to safeguard against the state from anarchy. It dreads the scenario of the balance of brutishness; of the reaction of the victims becoming equal and opposite to the horror of the terrorists. It wants the millennial reign of the peace of the graveyard. People should quietly bury their dead and resignedly wait to be butchered in like fashion!

Suleman's sermon is consistent with the gospel. The Scriptures teach intelligent peace: it does not mandate passive suicide. It instructs believers to "be wise as a serpent and innocent as a dove."

According to The PUNCH, the DSS warned Suleman to "watch your tongue" henceforth. That's futile censorship. As long as the government continues to flinch from tackling the killer herdsmen as terrorists, there will always be calls for citizens to defend themselves.

Survival instinct is an elemental part of human nature. People will naturally opt for self-defense in the face of a deadly threat, whether they are so commanded or not. To defend self is as human as to kill innocents is terrorist!

Posted by ANGLICAN DIOCESE OF OWERRI at 7:47 AM