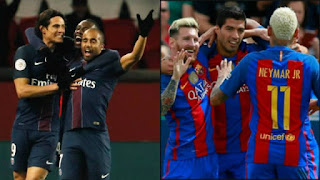 4 – 0! Are we talking about the Almighty FC Barcelona and it's magical trident? Messi, Neymar, and Suarez (MNS) all did play on Tuesday night but were transparent.
This is a score line we did not expect as Barce were better off on paper before the match.

Barcelona were unbeaten against PSG and were looking to extend it before the match.

But it was not so as Paris Saint Germaine (PSG) produced as stunning first-leg display of the round of 16 in the UEFA Champions league by demolishing and tearing apart Barcelona by 4 goals to nothing to take a giant step towards the last eight of the champion league.

PSG who were the better side in both the first and second half of the match; producing a total of 16 goals attempt compared to Barcelona's 4 goals attempt.

This heavy defeat to Barca left people asking, where were the MSN? What really happened? The truth is that PSG's defence were able to taim Messi, Suarez and Neymar (MSN) so that they won't do any damage to them.

The defeat means that Barcelona are totally out of the competition.

PSG will now look to finish the job when the teams reconvene for the second leg at the Camp Nou on March 8. Barca have mission impossible to do. Even if the MSN hit full throttle, it is not possible to score 4 or 5 goals without a reply from PSG.

No team has ever overturned a four goal deficit to go through in a champions league knockout tie.

Similar incident has happened few years ago where Bayern Munich gave Barcelona 4 goals without reply then went to Camp Nou and scored 3 goals without any reply too (7 – 0 on aggregate). Are we seeing a repeat of that again with PSG?

(c) Christian voice newspaper
Posted by ANGLICAN DIOCESE OF OWERRI at 8:41 AM