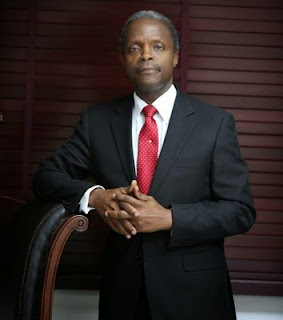 Nigerian's Acting President, Prof Yemi Osinbajo, has assured Imo people that the Buhari-led federal government will not abandon them, since, according to him, the state is very special to him.
Osinbajo described the state as the hope of Nigeria as it has great prospects for a refinery and power station.

The Acting President made the statements when he visited the state recently, where he held an interactive session with stakeholders at the Imo International Conference Centre (IICC) Owerrri.

Osinbajo was inundated with complaints of marginalization, utter neglect and lack of federal presence in Imo State.

He, however, said that President Muhammadu Buhari was aware of the contributions and support of Imo people during the last general elections, as he visited the state five times at that period.

Imo State is a major player in national integration and the Niger Delta affairs in general, he said.

The acting president said that a twenty-point agenda, comprising training in agriculture, Engineering, aviation and others had been mapped out for the states in the Niger delta region, adding that Imo State would be a major beneficiary of the scheme for the over 816 ex-militants.

He said that all the abandoned projects in the oil producing areas of Imo State would be investigated and appropriate sanctions taken against the contractors who, after collecting the contract sum, fled the site, adding that some of the culprits are sons and daughters of Imo State.

On the over N4 billion abandoned skill Acquisition centre at Ohaji/Egbema, the acting president said that it would be discussed at the federal executive council meeting.

He patted the Imo State governor, Owelle Rochas Okorocha on the back for his massive infrastructural development and peace on the restive Ohaji/Egbema and Oguta oil producing areas of the state.

He called for peace, adding that without peace there would be no meaningful development in the country.

Earlier, in what he described as utter neglect of Imo State by the federal government, the Imo state governor, Owelle Rochas Okorocha had called on the acting president, Prof. Osinbajo to come to the state.

He said that lack of federal presence and the neglect of the state, coupled with hardship as a result oil spillage in the oil producing areas of the state is responsible for the youths restiveness, which has taken time and resources to contend.

Governor Okorocha who said that without the block vote from the south Eastern states during the last general elections, All Progressives Congress (APC) would not have won the presidency. Pleaded with the acting president to see the need to convert the abandoned skill acquisition centre at Ohaji/Egbema into a university of sciences and Technology.

In her capacity as the chairperson, Imo peace and Reconciliation Committee in the Niger Delta, the wife of the governor, Nneoma Okorocha enumerated the problem in Ohaji/Egbema and Oguta areas to included, dilapidated infrastructure, including roads, schools and medical facilities.

Nneoma Okorocha said that respite has at last came to the area through prayers, consultations and reconciliations.

High point of the event was the filing out by ex-militants from Imo state who pledged their support to the state and federal governments and asked for reconnoiter by the federal government and fair treatment in the amnesty programmes. They were led by Comrade Emeka Igwe

Posted by ANGLICAN DIOCESE OF OWERRI at 11:02 AM