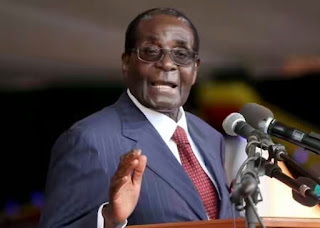 Donald Trump's administration has called on Robert Mugabe to respect human rights within and outside Zimbabwe's borders following the arrest of the campaigning pastor Evan Mawarire.
The US embassy in Harare issued a statement condemning the arrest of Mawarire and that of fellow pastor Phillip Patrick Mugadza whose prophecy that Mugabe would die on October 17 this year was met with fury by the Zimbabwean president.

Mawarire, the figurehead of the this flag civil rights movement, was arrested last week at the Harare International Airport on his return to the southern African country after spending six months in self-imposed exile, mostly in the US.

A spokesperson for the US embassy in Harare, David Mcguire, described the arrest of Mawarire and Mugadza as "unwarranted".

He said: "The US government unequivocally believes in the basic right of freedom of speech and calls on the government of Zimbabwe to respect the human rights of all Zimbabweans which are enshrined in the constitution. We believe that the basic right of Zimbabweans to freedom of speech – be it in public, through print media or social media – should be protected within and outside Zimbabwe's borders."

Mawarire faces up to 20 years in prison under the charge of subverting the government. He is yet to appear in court.

Mawarire was initially arrested in July and charged with inciting public violence and subverting the state.

It came after he accidentally sparked a protest movement that led to two days of mass strikes against Robert Mugabe's handling of the economy.

He achieved cult status for his message shared on Facebook and it led to a social media-led campaign against the regime.

His latest arrest comes after a series of threats from government officials and President Mugabe himself. He accused him of being sponsored by foreign governments and of being a false preacher.

"A man of religion will speak the biblical truth. 1 Corinthians what does it say? Love one another," said Mugabe.

"So beware these men of cloth, not all of them are true preachers of the Bible. I don't know whether they are serving God. They spell God in reverse," the president said.