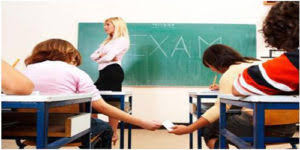 The African Initiatives Against Corruption and Examination Malpractices (AICEM) has taken its aggressive war against examination malpractices and other social vices to schools in Imo State.

The National Coordinator of the NGO, Mr. Francis Abioye, said that the organization was spurred to do this after identifying that corruption and examination malpractices were among the factors strangulating Nigeria's growth.

He was at St. Dominic's School, Umelagwa, Ezinihitte Mbaise LGA of Imo State to inaugurate the Anti-Corruption and Examination Ethics Club for the LGA.

He observed that Nigerians respect and uphold their value system anchored on honesty, integrity and patriotism, but the colonial masters abused the people's values and instituted dishonesty and lack of patriotism.

According to him, the organization had decided to launch the club in nursery, primary and secondary schools so that the younger generation would learn early that cheating is bad.

That way, he said, Nigeria must have laid its foundation for greatness, pointing out that corruption and exam malpractices destroy the destiny of the family and ultimately the nation.

A guest lecture, at the occasion, Prof. Okey Okoro of the Imo State University (IMSU) said that those who cheat end up badly in life, noting that the NGO has the vision and mission to stop examination malpractices and corruption in Africa and ensure that the youths learn to build self-confidence and trust in God.

He said that most parents encourage their children to cheat, adding that cheating often results from lack of contentment and poor time management.

Prof. Okoro called on the church to help, lamenting that the church had also descended so low as to become an agent of corruption, nepotism and indiscipline.

He insisted on the need to tell the truth always no matter the circumstance, noting that love of God and humanity are sure ways of eradicating corrupt practices.

(c) Christian voice newspaper
Posted by ANGLICAN DIOCESE OF OWERRI at 10:03 AM