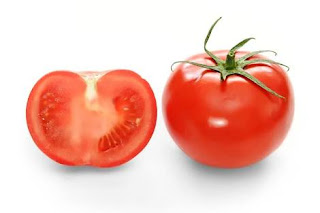 Eating tomatoes each day could save the lives of skin cancer patients, new research suggests.
Compounds responsible for the Mediterranean fruit's bright red colour may protect against deadly damage from the sun's rays.

A trial on mice showed those fed a daily diet of tomato powder, available in a range of supermarkets, had their tumours shrink.

When skin cancer spreads in humans, genetically similar to mice, it can become fatal by proving hard to treat.

How was the study carried out?

All of the rodents were then exposed to ultraviolet light, a confirmed trigger of skin cancer in humans.

They also discovered those who consumed the tomato powder had 50 per cent less deadly tumours.

The latest study showed only red tomatoes, full of carotenoids, had any significant effect, helping to shrink tumours.

However, the findings were only true for male mice, as no differences between the groups were discovered in females.

The researchers said male mice develop tumours earlier after UV exposure and that their tumours are larger and more aggressive.

Tomatoes can slow down stomach cancer, according to a study published in May.

This finding could pave the way for studies focusing on preventing the condition, as well as using diet to support conventional treatments.

Scientists at the Oncology Research Center of Mercogliano in Italy were behind the study.

Lead author Professor Tatiana Oberyszyn said: 'The study showed us that we do need to consider sex when exploring different preventative strategies.

'What works in men may not always work equally well in women and vice versa.'

Study co-author Dr Jessica Cooperstone added: 'Foods are not drugs, but they can possibly, over the lifetime of consumption, alter the development of certain diseases.'

Non-melanoma skin cancers are one of the most common of all cancers, with 100,000 cases diagnosed each year in the UK.

The findings, published in Scientific Reports, aren't the first to show the cancer-fighting properties of carotenoids.

Found in peppers, carrots and sweet potatoes, a 15-year study of 15,000 women noted the compound to reduce the risk of cervical cancer.

While regularly eating the brightly-coloured vegetables also appears to reduce the risk of prostate cancer by almost a fifth.

These antioxidant compounds, specifically lycopene, are deposited in the skin of humans after eating.

Dr Rachel Abbott, British Skin Foundation spokesperson, said: 'This is an interesting laboratory study in mice, however further research is needed to determine whether the same effect is applicable to humans.

'Most skin cancers are caused by sun exposure and so I would advise taking care in the sun, especially if you fair skinned, rather than eating more tomatoes.’

(c) Christian voice newspaper
Posted by ANGLICAN DIOCESE OF OWERRI at 8:32 AM