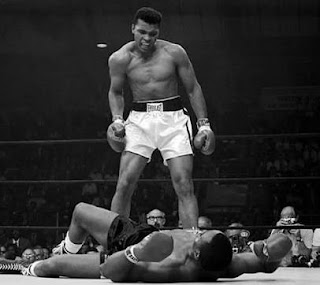 Indeed time changes everything. Change can come through several ways-incapacitation and death which is the ultimate.

By change a glorious era-even inglorious ones-are consigned to the waste paper basket of history and nostalgia.

That was the case of the boxing legend, Muhammed Ali and his glamorous boxing era. Before then, the sport was popular but with the advent of Ali, boxing got glamorized, no longer seen as the game for the poor and drop-outs.

Paradoxically, Ali was a high school drop-out but his natural intelligence, oratory and intellectualism distinguished him from his colleagues of all generations.

Apart from being the quintessential boxer, Muhammed Ali was a bold social crusader and port who used the fight his many causes.

He won the gold medal in the heavyweight boxing category in the Rome Olympics of 1960 and from there; the sky was the limit in his chosen career.

The first major engagement for the loquacious 21-year old in his professional career was his world title fight with the dreaded world champion, Sonny Liston.

But Ali could not be silenced for that was the period he tagged himself “the greatest; I sting like a bee and float like a butterfly”.

With unwavering confidence, Ali insisted that he would defeat the more experienced world champion.

In one of the major upsets in the history of boxing, Muhammed Ali knocked out the world champion, Sonny Liston in round 8 of the scheduled 12 round contest.

The other high point of his boxing was the stripping of his world title for refusing to serve in the US Army during the Vietnam War. He claimed that after converting to Islam that he became a clergy in the faith which, he argued, barred him from serving, in the army - “a conscientious objector” Ali's camp called it. Besides, he made the timeless comment, “I got nothing against the Viet Congs.” Many US citizens deprecated such a comment at a time when his country was at war and regarded it as the height of unpatriotism by an American citizen.

However, his title was eventually restored after five years of inactivity which showed in his subsequent fights which lacked the earlier intensity.

Among the most memorable fights he had after his world title was restored was the two with his arch-rival Joe “smoking” Frazier in which they shared victory equally. The fight was full of fury and bitterness and the Parkinson’s disease that slowed down Ali later in life was blamed on the damage he incurred at the two encounters.

The other fight that would always be talked about in the history of boxing was the world heavyweight title fight between Ali and George Foreman in Kinshasa, Congo DR. Ali depicted the fight as the ''rumble in the jungle”.

A powerful hitter and slugger, Foreman had never lost any fight before then and like in the case of Sonny Liston many years earlier, Foreman had won them via the knock-out route. Understandably, the consensus among pundits was that Ali would lose. He never lost but knocked out the hitherto unbeaten George in the eighth round of the scheduled 12rounds.

(c) Christian voice newspaper
Posted by ANGLICAN DIOCESE OF OWERRI at 4:24 AM