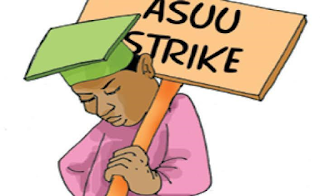 The educational burden of Nigeria is unbearable because of sheer number and spread. But the enormity of the problem is under-rated. When university teachers go on strike to ask for more pay, better facilities, more funding and all the other things they complain about, it is hard not be in sympathy with them, even though they have no reason to be blind to the fact that the country is very poor now, putting it bluntly.

Provided the ASUU does not base its demands on the comparison it often makes with universities abroad and what Nigerian political office holders get, they will always evoke the sympathy of member of the public. Where they make a mistake is letting their frequent strikes be disruptive to the lives of innocent students and their parents who have not contributed in any way to the hopelessness in the campuses but yet are bearing the brunt of the strike actions.

If Nigerians should be honest to themselves, they would admit and make it clear that the cost of education was impossible to meet when the oil money was flowing, not to talk of now that it has dried up. On this basis one can now realistically plot what can be due to the universities from the national budget, not after the budget has been done.

The reasonable thing to do is to talk of the budgetary percentage to education which would be spread across board to accommodate the universities meaningfully, but definitely not completely, it is at the point of budgetary allocation that punches can be thrown and agreement reached about what the universities get.

Even though the Federal government has said it cannot pay the amount the ASUU is asking for, it still takes the false and pretentious posture of a rich patron who can pick any bills, and the lecturers take them as such. That's why the misunderstanding between them persists and disruption occurs in the university system. The brutal truth must be told. That is that the university teachers cannot get what they want and perhaps deserve. Everybody is foolhardy targeting the money that is not there or negotiating what cannot be done. This is a time for belt-tightening. All should join to look for the money to spend before making demands. That should be the realistic approach.
Posted by ANGLICAN DIOCESE OF OWERRI at 11:42 PM