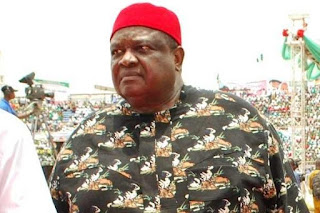 Renowned politician and business mogul, Chief Emmanuel Iwuanyanwu, has said that there is no reason why the mention of Biafra should cause panic in Nigeria.

Iwuanyanwu, who was chairman at the opening ceremony of the 3rd Quarterly national Executive Council (NEC) meeting of the Nigeria Union of Journalists (NUJ) in Owerri, recently, said that other tribes in Nigeria have their various versions of Biafra.

Arewa, he said, is for the North, Oduduwa for the West and so, Biafra is for the Igbo.

He was emphatic that no tribe in the country had kept more faith in Nigeria than Ndigbo and so, the issue of Biafra should not cause any panic among the people.

Iwuanyanwu, who had aspired to the Presidency of the nation under the defunct National Republican convention (NRC), praised President Muhammadu Buhari's anti-corruption war and urged the journalists to join in the fight.

He noted that the Niger Delta problem and the Boko Haram disturbances were the major problems the country was facing and suggested that the president should summon a meeting of leaders in these areas to discuss the matters.

He stressed that Nigeria was passing through difficult moments but urged the journalists to join hands in moving the country forward.

The Governor of Imo State, Owelle Rochas Okorocha, at the occasion, called on Nigerians to speak good of the country always and to encourage their leaders.

He called for sacrifice and charged the journalists to indulge in investigative journalism and constructive criticism, while shunning negative reportage of issues touching the country's integrity.

Gov Okorocha enumerated his achievements and used the occasion to state that the state was not owing any bank, dismissing the story as rumours.

“I want to be seen as a governor who came, saw and conquered; he declared.

The NUJ National President, Alhaji Waheed Odusile, said that the journalist had the fight against corruption at heart.

He appealed to employers to pay journalists what is their due to enable them to fight with zeal and without fear or favour.

Alhaji Odusile urged the political class not to see journalists as enemies but as partners in progress, and appealed to government to aid media organizations to ensure democracy.

“Journalists don't make news, rather they report news”, he reminded the audience, and urged journalists to work according to ethics.

He also thanked Gov. Okorocha for accepting to host the meeting.

In his welcome address, the NUJ Chairman in Imo, Sir Innocent Igwe, said that the state is blessed with the finest crop of journalists.

He said that the Imo State government had renovated the press centre; announce a N20 million agric loan for journalists, among other largesse.

(c) Christian voice newspaper
Posted by ANGLICAN DIOCESE OF OWERRI at 7:12 AM