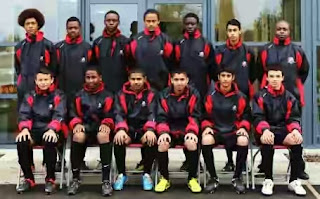 Desperate poverty most times drives Nigerian youths to sports, especially football, through which they prematurely assume and play the roles of breadwinners for their families even as teenagers.

When hundreds of Nigerian young footballers sneak out of Nigeria to such football backward countries like Vietnam, Finland, India or Bangladesb, to play football there, the reason is not for glamour but to make some income playing for teams in these countries' undeveloped football league which they send home for the upkeep of their families back in Nigeria.

At least the low exchange rate of the naira in the international market would ensure that such remittances would make all the marginal differences in the lives of their parents and siblings back home.

The above scenario was vividly and dramatically played out recently in Abuja when Nigeria's Under-20 female national football team (Falconets) returned from the World Cup in far-away Papau New Guinea and each member of the team was paid the miserly sum of N10,000 as transport allowance to take them home

This profoundly fell short of the expectations of not only the players but of Nigerians.

For 18-year-old defender, Mary Ologbosere, the development was more than she could bear. Because, when she was on national duty with her colleagues in the far-flung Pacific Island nation, her father died with the panperised family solely depending on using her allowances to offset the burial.

According to the report, the teenager, aware of and overwhelmed by the weight of her family responsibilities, could not have a wink all night culminating in her suffering from depression for which she had to be rushed to an Abuja hospital and admitted in the Trauma Unit.

The Falconets were eliminated at the preliminary stage. Yet with two victories and one defeat, though heavy defeat (6-0 by Japan), they did not perform so badly.

In any case, the girls are entitled to their camp allowances and the traditional bonuses for victories and draws. In other words, these allowances might not have been less than one thousand dollars for each and which could have translated to over N500,000 at the current exchange rate and which could have gone a long way in burying Mary's father.

In recent times, the NFF has failed to meet their obligations to national teams with the alibi that they are cash-strapped. Such is a national embarrassment apart from unfair exploitation of these teenagers who might have been assured of prompt payment of their allowance s after their national assignments only to be sent home empty-handed. Yet many of them like Mary, are their families bread-winners!
Posted by ANGLICAN DIOCESE OF OWERRI at 3:23 AM