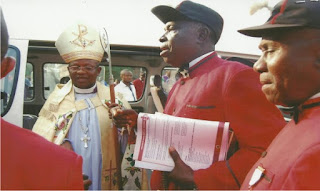 Debt recovery was on top of the agenda during the last business meeting of the Ikeduru Council of Knights which took place weekend at St. Paul's Anglican Church, Umuhu Atta, in the Ikeduru council Area of Imo State.


To this end, the president of the council, Sir Ciidean U. Ezeji, passionately pleaded with members to pay off all their debts before the expration of the grace period in December 2016.

In an address presented on his behalf by Sir Boniface Nzeako, the council treasurer who presided at the meeting, Sir Ezeji lamented that huge indebtedness by some members had greatly affected some on-going projects embarked upon by the council, which included the multimillion naira ultra-moden council's secretariat and others.

The meeting, which relieved the activities of the council within the period under review also reserved reports from the Joint Council of Knights and other provincial outings.

Addressing the members, Sir Ngeako thanked those who always attend the councils meetings and other engagements, and prayed that God would continue to strengthen them. He enjoined them to continue to carry the costs of Our Lord Jesus Christ which, he said, was service to God and humanity, adding that in the fullness of time God would remember and reward them.

He spoke on the impenitence of members clearing their indebtedness, adding that it does not speak well of a member if he or her passes on but leaves behind huge indebtedness to his family.

Also during the interactive session, the secretary of the council Sir Emma Ukonu reminded members o f the resolution of the JCK which Ikeduru council is a member, that any member investitured outside his home Diocese, must identify with his home Diocese as an “Associate member.

Earlier, during the Eucharistic service, the chaplain to the council, the Rev. Canon Charles Mgbemene had described faith as a central focus that moves the hand of God.

Expounding on a central theme entitled, The faith that mousse mountain (Matt 21:21), Rev. Canon Mgbemene said that the only panacea to the confidence in God.

He thanked God that inspite of the hard time, his children are still-life adding that though some have joined the church, triumphant.

He also thanked the Knights and Ladies, especially those who always avail themselves of the activities of the council, and prayed to God to always remember and sustain them.

He advised members not to be afraid of the present ugly circumstances that have bedeviled over coveting, adding that those who failed in the day of adversity have small faith.

Nevertheless, before the house rose, the presiding officer, Sir B. Nzeako used the opportunity to thank those who participated in the two evangelistic out reaches for the year, which he said was God's mandato in support of small church stations.

Pleaded with those who made pledges to please redeem them.
Posted by ANGLICAN DIOCESE OF OWERRI at 9:20 AM